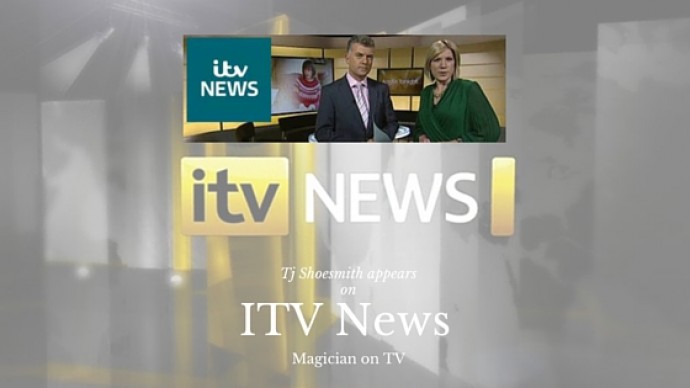 Close Up Magician, Tj Shoesmith became an award winning magician in 2013. So, he was invited by ITV News to appear on its evening program. Where TJ met Emma Baker and Jonathan Mill in the studio, he also went out on the streets of Cambridge with Stuart Leithes one of ITV‘s reporters.

Tim Shoesmith was interviewed by Sue Dougan after winning the Magic Circle Close Up Competition. Where he talked about close up magic and how he developed it and also about his past professional life.

Nick Coffer of Three Counties Radio challenged Tim to perform a trick on the radio. So, TJ took up the challenge and with the help of someone on the end of a phone line correctly identified a chosen card. As a result, Nick was surprised by how well magic works on the radio with a little imagination.

Julian Clover runs a current affairs program on Cambridge 105 each afternoon and Tj Shoesmith appeared on the show performing close-up magic on the radio. Tj Shoesmith spent much of his childhood in Cambridge, so it was an excellent place to return to after his win.

Magic Week is the most popular magic news reporting website in the UK. Hence, Magic Week interviewed TJ after the win.

Tj Shoesmith spent a considerable amount of time in Watford and started his work as a close up magician while living there. Consequently, the local paper interviewed TJ just after winning the Magic Circle Close Up Competition.