Is small close up magic better? 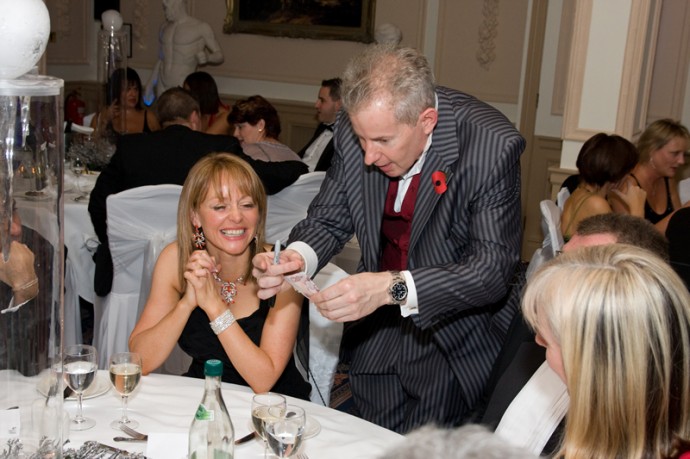 I arrived at The Magic Circle a week or to perform small close up magic. Or so it seemed. I was to perform as a close-up magician at one of their corporate entertainment evenings. I carried two cases in, which amused my colleagues. “It is close up!” they said.

It started me thinking about what exactly is close up magic and does it necessarily mean the props are small. This week the Magic Circle Chat Room started a discussion. This was about the possibility of using the torn and restored newspaper as a close up trick. There were some in favour and some against. However, I think all agreed it is possible to fool someone at very close quarters with such a trick.

Close up magicians usually keep the props small often talking about pocket management. In other words, they want the props to fit into their pockets so they can move around easily. A wedding magician moving from table to table during the wedding breakfast cannot afford to take large props with them.

However, it strikes me, that the bigger the magic, the better it is in certain situations. You may be performing for a small group. However, when others can see it from afar it will increase the intrigue and make the magician’s life easier.

One of my favourite Tricks

One of my favourite tricks is the three ropes. Which I have extended into a slightly longer routine along the lines of “three ropes and a baby”. It is a classic example of, “packs small, plays big”. Which works well in close up but also in a cabaret magic situation. It is a strong trick, but also very visual. So, when I am working one table it can be seen clearly by others. This lets them know who I am and why I’m there. It also creates the interest which makes approaching their table later easier.

I have seen all manner of tricks used close up. Although the Ninja Rings are popular I have seen a full set of eight-inch rings used by a table magician. You cannot detect the method. Even if it is under the spectator’s nose.

Props small are really used for convenience and to facilitate the quick resets that are required for this kind of work. The most important aspects of our work are entertainment and wonder. I really doubt an audience cares how this is achieved.