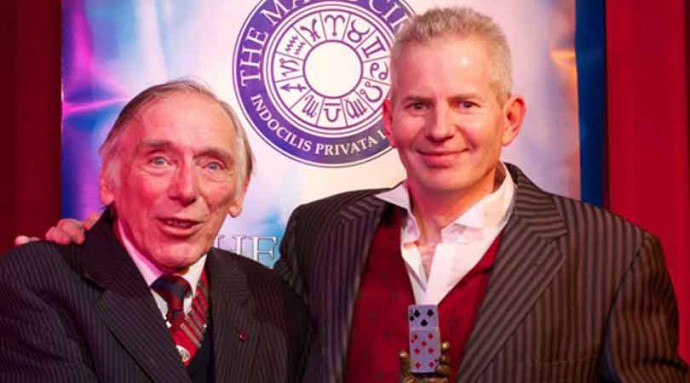 March 13, 2013. Magic Circle champion, TJ Shoesmith, has become the Close Up Magician of the year. Hence he is one of just a handful of working magicians across the globe to bear the accolade. The Magic Circle announced this elite award last week.

TJ has worked as a magician and pickpocket at corporate events for the last fifteen years. He also tours the country as half of “Devious Minds.” As a result, this stage show has enjoyed critical acclaim at the Edinburgh Fringe Festival.

Close up magic is his speciality. Magic of this kind is regarded as the most demanding. The spectator witnesses this magic right under their noses. The Magic Circle has awarded this accolade only a few dozen times. So the number of winners still practising the craft is small.

The Magic Circle competition holds this competition annually. It is open to members of the club worldwide.

The competition requires the highest level of performance. The early heats were held on video, which takes no prisoners. Then, we were whittled down to a final eight. I had to perform in front of a panel in a small room. The Magic Circle broadcast a video feed to the theatre above. Members packed the theatre.

Performing for a small number of people knowing that your friends and colleagues are scrutinizing your every move on a large screen is very stressful. You have no idea how they are reacting.

Following TJ’s final flourish, in which he restored a card while reciting Shakespeare, the judging panel deliberated. This panel included musician Marc Almond and magician and comedian Paul Zenon. They selected TJ as the winner.

I am honoured to be chosen as a member of such an elite group of close-up magicians and look forward to representing The Magic Circle in the future.

TJ is also a member of the Inner Magic Circle. As a result, he is at the highest level of the world-famous Magic Circle club. In fact, only 200 magicians enjoy this status worldwide. This Magic Circle Champion has made appearances in Los Angeles, New York, Canada, South America and all over Europe.

TJ Shoesmith is a magician and pickpocket who works on his own and as half of the stage show Devious Minds. His work encompasses both public and corporate performances.

He has worked for global brands including Bloomberg, Pinewood Studios, Jaguar and Liverpool FC. He has also made appearances at Monday Night Magic in New York. Other venues include The Magic Castle in Hollywood, The Magic Circle in London and Royal Caribbean Cruises. As well as comedy and cabaret nights throughout the United Kingdom. In 2011 he won the Houdini Originality Prize at the International Brotherhood of Magicians Stage Competition.